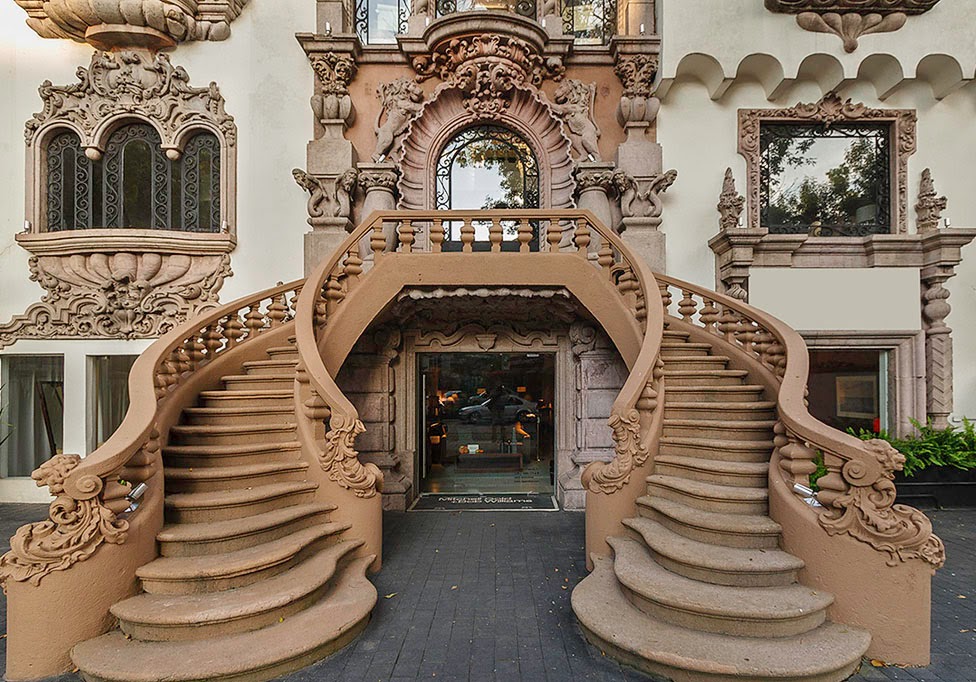 Polanco, which extends along the north side of Chapultepec Park, is home to some of the wealthiest people in Mexico. It has some of the best hotels, restaurants and shops in the city and is the location of choice for many foreign embassies, international corporations, and a large portion of the city’s Jewish community

Near to many of the top museums, the air of sophisticated culture extends even to its streets, named after philosophers, writers and scientists. Avenida Presidente Masaryk (named after a former Czech leader), is often compared to New York’s Fifth Avenue or Los Angeles’ Rodeo Drive, with its line up of status conscious stores like Tiffany’s, Gucci, Chanel and Louis Vuitton.

Development of the area began back in the 1930’s, but the big building boom happened in the 1950’s, and it still continues. Designed as a purely residential area at first, homes in Polanco were marketed to those wishing to emulate an American lifestyle—freestanding houses had front and back yards, a novelty back then. Examples of the original architecture, a florid style with ornately sculpted doorways and windows known as Colonial Californiano, are scattered throughout the neighborhood, although many have been turned into stores and offices.

Polanco suffers a bit from a reputation as a snooty place—there’s even a popular restaurant named ‘Snob’. A few years back, the ‘Ladies of Polanco’ became famous after a video on youtube went viral showing two wealthy residents berating a dark-skinned transit policeman for daring to give them a ticket. It was the talk of the town for several weeks. But there’s no denying that Polanco is a defining element of Mexico City, and well worth a visit to see how ‘the other half’ (or at least the top 2%) lives.

Two metro stops (Polanco and Auditorio) serve Polanco on the #7 line, but neither is very convenient for a walking tour. Arriving by taxi, ask your driver to take you via Campos Eliseos, a lovely tree-lined street that gives you a quick overview of the luxurious life-styles enjoyed by many here. Ask the driver to leave you at the corner of Julio Verne and Parque Lincoln, just next to a taxi sitio you can use later on this tour.

Polanquito, the area around Parque Lincoln, is the closest thing to a town center, and the best place to walk around and get a feel for the neighborhood. In the park you’ll find an art gallery, an aviary, and a small pool where kids play with toy sailboats. The nearby streets, Virgilio, Julio Verne, Oscar Wilde and Alexandre Dumas are lined with stores and restaurants, and lots of well-heeled customers. At Masaryk 360, walk into the Pasaje Masaryk, a former apartment complex turned into a shopping mall, which feels like a bit of old Palm Beach in Mexico City (‘Snob’ is here). It was designed in 1939 by Francisco Serrano, the architect of many of the best Art Deco buildings in Colonia Condesa.

Emilio Castelar runs along the north side of Parque Lincoln. There are some great examples of extravagant Colonial Californiano architecture here. It’s worth poking inside to get a glimpse of the splendor of these former residences, even though they've been remodelled as stores and reataurants--the glamour of yesteryear is still evident amidst the layers of comtemporary posh. As you walk west on Emilio Castelar (toward Edgar Allan Poe) you'll find these old houses at #135, #149 and #163.

Other than Polanquito, the other area well worth visiting is the ultra-modern development of stores, offices and museums in the northwest corner of Polanco. Here you'll see a futurist verison of Mexico that stands in extreme contrast to its image of old-style colonial charm.

It's a long hike from Polanquito, so take a taxi from the sitio in the middle of Parque Lincoln (on Julio Verne, in front of the statue of Martin Luther King). Go to the main entrance of the Centro Commercial Antara (Ejercito Nacional near Moliere), the snazziest shopping mall in town--very deluxe. During one visit I heard the voice of Ella Fitzgerald singing ‘My Heart Stood Still.’ Mine almost did, too, when I saw some of the price tags. There’s a pleasant open-air food court--better for people watching that dining. The Cinemex movie theater upstairs features reclining leather seats and waiter service—you can order from a 10-page menu.

Leave the mall by the passageway to the left where you entered, across from the Hugo Boss store. Outside, across the street, you'll see Plaza Carso, a recent development of shops, offices and apartments. The big draw here is the Jumex Collection, Mexico City’s most important contemporary art museum. It features big-name artists in exhibitions that change every month or so. Check their website for information (www.fundacionjumex.org). There are great views from the second floor terrace.

Next door to the Jumex Collection is the Museo Soumaya, pet project of Mexican billionaire Carlos Slim (his son-in-law designed the sinuous, metal-clad structure). The collection is a grab bag of masterworks to kitsch, but there are some notable European paintings (by El Greco, Reubens, Tintoretto, and Zurburan for example), a number of Rodin sculptures, and a delightful selection of pre-Hispanic ceramic vases and sculptures on the fifth floor. The best way to see this museum is to take the elevator from the lobby to the top floor and work your way down.

ALSO WORTH A LOOK IN POLANCO


Museum Store Books (Aristoteles 8, near Campos Eliseos) has a good selection of books on art and culture.
Posted by The Author at 4:12 PM

Thanks for the tour of Polanco. I've only passed through, never spent any time there.

Thanks! I look forward to the updated book. I use the old one every time I'm in Mexico City. And now I have some guidance for exploring Polanco! Saludos, Anne from Zinnia Folk Arts

Thanks Jim. Good information and I'll put my new book right next to the dog-eared old one. DF was the beginning of my love affair with Mexico the first time I arrived to handle a project there in 1974!
I'm looking forward to seeing some of the new things I haven''t seen since my last visit to that area a few years ago.

Polanco has the most boring architecture and unfriendliest people in Mexico City. And, as a European friend remarked, "it could be anywhere; there's nothing particularly Mexican about it."

I usually try to avoid it when I'm there.

Kim G
Boston, MA
Where I can experience unfriendly people without traveling.

Will have to go to Polanco when there for first time since 1960 since Pujol and Biko are there.