I found this today on another blog . The writer was attending the Independence Day Grito in Mexico City's zócalo:

"In Mexico City, anyone who is anybody has hired bodyguards and what you see are
businesspeople, legislators and people of both the middle and upper classes surrounded by men in suits, looking around.
There is an overwhelming feeling of fear and insecurity throughout the population in Mexico City."

I was reminded of a frantic phone call I received from my mother years ago when I lived in New York City.
"Are you all right?" she asked, breathlessly.
"Sure, I'm fine, just finished dinner--what's up?"
"They're burning down buildings, shooting people in the streets, rioting everywhere!--I'm watching it on TV right now!"

Indeed, something was going on in Brooklyn, but the impression had been made that New York City was in a state of emergency.

We live in an age where fear sells almost anything--quite easily, it seems. It can distort or expand truth to the point where it is unrecognizable.

There are some grim truths in Mexico these days, and surely some people live in fear. But, while headlines about the killing and kidnapping of14-year old Fernando Martí, the 24 cadavers found in San Isidro Tehualtepec, and the 7 innocent bystanders killed by a grenade in the plaza of Morelia, may have overwhelmed some Mexicans, at least 150,000 of them showed up here recently to demand a response from the government. No doubt, the police and the judicial system are in great need of reform, and maybe some drastic headlines will finally push the government to act. But, as I walked through the park this morning on my way to yoga class, watching people jogging, walking their dogs, feeding ducks in the pond, I was reminded of the bigger picture. The violence occurring in some parts of Mexico does not turn Mexico into a violent nation.
Posted by The Author at 11:24 AM No comments: 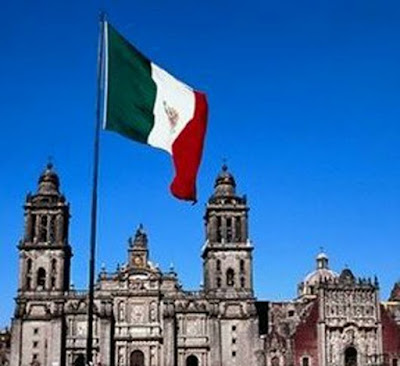 Facing challenges by conservative factions here, ’s year-old abortion rights bill was upheld () by the Supreme Court last week. Along with a new domestic partnership bill, another measure making it easier for transsexuals to change their names, and a proposal for a right-to-die law (expected to pass the city’s left-leaning legislature), is poised to become, in mayor Marcelo Ebrard’s words, “the most liberal city in ”.

This is a new identity for our city, better known as the place where Aztecs ripped out beating hearts, Spaniards burned heretics at the stake, and government soldiers shot at unarmed students. Shaken to their foundations by the 1985 earthquake, the city’s inhabitants clearly sense the basic instability, the fragility, of our planet...perhaps making them more tolerant of everything that's on it.

Until recently, even the discussion of birth control or abortion had been taboo, so the new law touches a lot of hot spots. For many Mexicans, the often heard phrase“lo que Dios nos mande” (“whatever God sends us”) sums up the attitude here about family planning. The idea of a woman choosing to be, or to remain, pregnant, is new in Mexican society.

One out of every four Mexicans lives in the greater metropolitan area, so anything that goes on here affects the whole country. As celebrates its Fiestas Patrias amid reports of kidnappings and drug wars, the Supreme Court’s decision reaffirms the direction of Marcelo Ebrard and his PRD party, whose daring, liberal ideas are changing the face of .

Posted by The Author at 6:00 PM No comments: