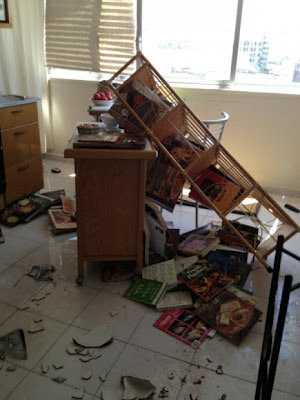 (Photo: My friend Ruth's kitchen after yesterday's earthquake)
I had just arrived at my studio and was putting the key in the door when I had a strong feeling of wooziness, like a sudden onset of the flu. It only took a few seconds to realize that it was an earthquake. I stood back from the building and saw that the sidewalks were filled with people, all looking up at the slender concrete pylons that support a mass of tangled electrical wires above our heads, gently swaying like stalks of wheat in the wind. I found a spot where I could see the sky clearly, and tried to move in sync with the rhythm. The crowd was eerily calm and quiet. My first thought was to call Nick, and somehow my cellphone worked, so my anxiety for him was allayed (power and phone service were out for hours just after that).
I've experienced four or five earthquakes here, but this was the strongest. Reports ranged from 7.4. to 7.9 on the Richter scale. My immediate reaction included something akin to pleasure, like the joy of riding a horse or a sailboat, mixed with awe at the realization that the earth under my feet--for hundreds of miles around--was on the move. The fear and churning in the pit of my stomach arrived a few hours later when I went out for lunch. Although there was no damage in either my home or workplace, the awareness of what a tiny speck of life I am when faced with Mother Nature's whims was deeply unsettling.
Last night, after a couple of tequilas, I had the urge to see the trashy 1974 disaster thriller 'Earthquake' starring Charlton Heston and Ava Gardner in one of her last screen appearances. It's pure garbage, but it seemed to work as a 'hair of the dog' cure for the unreleased tensions of the day.
Here's a clip for anyone who needs it:
http://www.youtube.com/watch?v=XrqTuyZROao&feature=related
(you can skip to 2:15 unless you're a fan of Ava Gardner)
Posted by The Author at 10:46 AM 5 comments: