Benjamin Franklin had never been to Mexico when he wrote, “In this world nothing is certain except death and taxes”.
With big business tax loopholes, and an estimated 59% of the workforce in the non-taxpaying ‘informal economy’, the only certainty here is death. Each year on Dia de Muertos, Mexicans face that inevitability head-on.
My first experience of Dia de Muertos was years ago in San Miguel de Allende. I waited patiently in a long line of flower-laden visitors to pass through the narrow gateway. Visits to gravesites in the U.S. were dark, sad, and solemn events, with no encouragement to linger. In Mexico, upon entering the vast field of tombstones, it seemed more like a big party, a bit subdued, but festive, colorful, bustling. There were flowers everywhere, candles flickering, guitar players strumming, people eating, talking, praying, laughing, and only a few of them crying.
With its roots deep in the pre-Christian past, Mexico’s attitude toward death presents one of the strongest contrasts to that of its northern neighbors. Nobel laureate Octavio Paz  wrote, “The word death is not pronounced in New York, in Paris, in London, because it burns the lips. The Mexican, in contrast, is familiar with death, jokes about it, caresses it, sleeps with it, celebrates it; it is one of his favorite toys and his most steadfast love”.
Famed 19th century artist José Guadalupe Posada created a popular image of death,
La Calaca Catrina, that shows up everywhere. With her big feathered hat and wide grin, she looks more like Carol Channing in ‘Hello Dolly’ than any frightening image of the Grim Reaper. The curious phrase “Feliz Dia de los Muertos” shows up on sugar skulls and greeting cards. Death in Mexico, while not exactly a friend, is certainly a member of the family.
Indigenous peoples believed that the soul did not die, but moved on to a resting place known as Mictlán, from whence it could be summoned home to visit friends and relatives. Before the Spanish conquest, the return of departed souls was celebrated in July and August. The Spaniards changed the date to coincide with All Souls’ Day of the Catholic Church, leaving the newly baptized natives with only two days, November 1 and 2, during which they welcome home the deceased.  The first day is devoted to departed children, the next to adults.
It’s a long way from Mictlán, so the living must appeal to all the senses of the dearly departed to help them find their way home. Food, flowers, incense, music, even cigarettes and alcohol are used to create altars, known as ofrendas in homes and public spaces all over Mexico. You don’t have to be Mexican to participate in Day of the Dead rituals, however. Visiting a cemetery or preparing an altar at home can be done by anyone.
The best place to stock up on all the necessary items for a home altar is the Mercado Jamaica (Avenida Morelos and Congreso de la Union, metro stop Jamaica on the #9 line). As the city’s wholesale flower market, the quantity of marigolds, coxcombs and other flowers is staggering. Booths set up around the perimeter of the market offer sugar figurines, candles, incense, food, papel picado (die-cut tissue paper), and other items used to create altars.
Although celebrations in rural areas of Oaxaca and Michoacán are often written about, Day of the Dead in Mexico City occurs on a scale befitting one of the planet’s biggest cities.
Getting into the main cemeteries in Mexico City can be a daunting proposition, but altars are set up all over town. You’ll see them in markets, shopping malls, metro stops, banks, hotels, school, hospitals, and outside every Delegación office.  Here are some special places known for their elaborate altars:

Altars are set up between October 28 and 30, and dismantled promptly on


November 3, when Death is given a holiday until next year.
Posted by The Author at 7:34 PM 1 comment:

BICYCLES IN MEXICO CITY--Now for Tourists as well 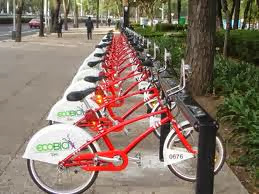 When Mexico City's 'EcoBici' bike sharing program was first announced in 2010 I thought,
"Who would be crazy enough to ride a bicycle here?" Then one day Nick came home with two green cards, one with my name on it. "Here's your new Eco-bici card. Let's go for a ride."

Despite my initial fears, it didn't take me long to become a fan, and now hardly a day goes by without at least one bike ride. It took some time to figure out routes beyond my immediate neighborhood, Condesa, which is fairly calm traffic-wise. But now I ride off to the Centro Histórico or Polanco, taking advantage of the bike lane along Reforma or a detour through Chapultepec Park. While hardly stress-free, riding in the city is not nearly as bad as I'd feared, and I sense that drivers are becoming more accustomed to paying attention to their two-wheeled neighbors.

There are now around 100,000 users and 275 stations around the city. You swipe your card to release a bike and simply place it back in the rack when you're done--you can leave it at any station.

The original program required a proof of city residency, but now it is open to anyone with a passport (or other major ID) and a Visa or Mastercard. You can get a card for one day (90 pesos), three days (180 pesos), or a week (300 pesos).

You must go in person to sign up. There are offices at Nuevo Leon 78, between Michoacán and Laredo, in Colonia Condesa, or at La Fontaine near Masaryk in Polanco. The offices are open Monday through Friday from 9am to 6pm, Saturdays from 10am to 2pm. Closed Sunday.

For those hesitant to tackle city traffic, I recommend taking a bike out on Sunday (which means you have to get your card by Saturday). Most of Paseo de la Reforma is closed to traffic from 9am to 2pm on Sundays, and the feeling of freedom and the chance to appreciate the grandeur of Reforma without traffic is exhilarating. Bikes are also allowed within Chapultepec Park. On the last Sunday of each month there is a 30 km. traffic-free bike route that takes you around the entire city.

FREE BIKES are offered by the city at locations around the city--next to the Cathedral, along Reforma and in Polanco, Condesa and Roma. Click HERE to see the map of station locations. You must leave a credit card and passport to take a bike. Of course, the big advantage of the eco-bici is that you can drop it off at hundreds of stations around town, then just pick up a new one when you're ready to move on.