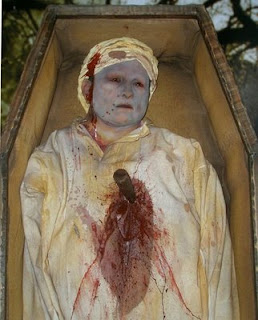 If you've been upset that you missed the Vampire and Werewolf Exhibition at the Police Museum here in Mexico City, take heart--it's been extended indefinitely.

Although it's a bit disheartening that this is one of two blockbuster museum shows of the year (the other was a History of the Barbie Doll), it's another example of the surrealism that makes life in Mexico so exciting. Where else do you find the combination of vampires, police, and happy familes?

Click here to read my review from The News or read the text below.

Day of the Dead and Haloween have come and gone, but fascination with the macabre, violent, and gory aspects of life can be found all over Mexico year-round. The Mummy Museum in Guanajuato, The National Museum of Death in Aguascalientes, and the Museum of Instruments of Torture and Capital Punishment here in el DF are all popular destinations for family outings. Even in church you’ll find paintings and statues whose graphic depiction of the passion of Christ or the saints can make many foreigners shiver.
So when I saw the announcement of a new show at the Police Museum here in Mexico City, my curiosity was aroused. “Vampiros y Hombres Lobos: Mitos y Realidades” (“Vampires and Werewolves: Myths and Realities”) is the follow-up to last year’s blockbuster show “Serial Killers”, which was seen by more than a quarter of a million people. If first week attendance is any indication, the current show will be another mega-hit.
The exhibition consists of a dozen small rooms filled with stage-like diaoramas, videos, maps, and explanatory texts. Mixing legend and fact, the show seeks to educate as well as to thrill. Much of it would have American parents up in arms as overly violent and gory, but the people I spoke to seemed to enjoy it. Yadira and Eunice, both 17, particularly liked the room full of caskets. Manuel and Daniela, a young couple out on a date preferred the vampire babies. Six-year old Maria Carmen hid behind her mother and shyly giggled ‘Si’ when I asked her if she liked the show, leaving me with the feeling that a big old gringo was far more frightening to her than the vampires.
Special attention is given to Mexican vampires, including several from Aztec and Mayan myths, and the famed ‘chupacabras’, that half-man, half-animal bloodsucker that often appears in Mexican newspapers. Perhaps the most shocking display, however, is a full-scale recreation of the kitchen of Richard Trenton Chase, ‘The Vampire of Sacramento’, who was convicted of six murders in 1979. He’s shown eviscerating a female victim, while behind him, the open refrigerator shows grizzly evidence that he didn’t shop at the local supermarket.
The show is largely the work of the family-run Morphix Group, a Mexico City-based special effects company that has worked on many films (among them Mel Gibson’s ‘Apocalypse’ and ‘The Labyrinth of the Faun’). I spoke with Abraham and David Gomez, and their uncle José. “We’re known as ‘the horror family’”, David told me gleefully, “We eat, breathe and sleep horror.” Aside from their special effects work, the company also produces masks and novelty items for Haloween. Two years of research and fabrication went into the current exhibit, and the Gomez family is clearly proud of their work.
“A few people have fainted—mostly adults—and a couple of people came out after seeing half the show, but in general people really like it,” José explained.
“The real monsters are out there,” said Abraham, pointing to the street. “A lot of politicians are using fear these days to control people. We think fear belongs in places like this or in the movies, not out in the real world.”
Luckily, the curators tell us several time-honored ways of warding off vampires, beyond the usual ones of holy water, silver bullets, and a wooden stake through the heart. Wearing red, sleeping in reverse (your head where your feet would normally be), or hiding near a flowing stream will help, and be sure not to answer the door unless you hear three knocks—vampires can’t count beyond two. Once bitten, a vampire’s victim can be purified by drinking the ashes of a dead vampire mixed with a little water. And did you know that Saturday is the best day to catch a vampire? Werewolves can be warded off by salt or frogs, or by hanging a colander on your front door—they’re forced to stop and count all the holes.
There is even a little gift counter out front where you can buy a catalog, or a key chain sporting a bloody, severed fingertip (“they’re hand-made” the salesgirl assured me).
The 55 peso admission (35 for children) makes this the most expensive museum show in town, but it doesn’t seem to have scared away the crowds.
The Police Museum is located at Victoria 82 (near Revillagigedo, metro Juarez). The show is open 7 days a week from 10am to 6pm.
Posted by The Author at 12:09 PM

Frida Kahlo would have done a painting of this news story, although she might have added knives and spurting blood (death by drug overdose lacks her visual punch).
We've been through earthquakes, epidemics, drug wars---and now dead midget wrestlers. Life in Mexico City is never dull.
Posted by The Author at 9:02 AM