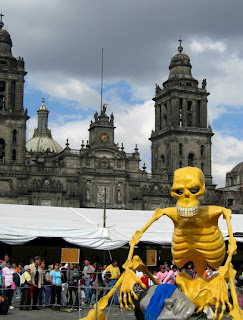 "An image of Christ on the cross -- known as the “Lord of Health” -- was removed from its spot in the cathedral for the first time since 1850 and carried in a procession around central Mexico City. The “Cristo,” as the image is known, has been credited with past miracles, including intervention in an 1850 cholera outbreak."
(from http://www.catholicculture.org/news/)

I took the garbage out last night and decided to take a walk around the block. The usually busy commercial strip across the street was eerily quiet. The newsstand, the juice vendor, the taco and torta stands, the restaurants--all closed. The OXXO convenience store was the only thing open.

I normally greet peace and quiet in the city with pleasure. Semana Santa, Christmas and New Year's Day--these rare moments of urban repose are a real treat. But last night was something else. There was a palpable sadness to it all, knowing that once again during a catastrophe, those who already have the least are the hardest hit.
Posted by The Author at 8:58 AM 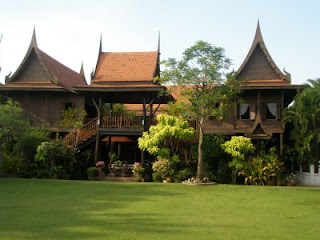 Here's a tip for the Thai-food-deprived out there--something we just discovered today. Lunch at Thai Spice (Sonora 49, near Durango in La Condesa) had us thinking we were back in Bangkok for a moment. The tom yum soup and the green curry were definite winners, and the lemon grass tea was a perfect beverage. The young Thai chef told us that it's an uphill battle with many Mexicans, who are naturally unfamiliar with the food. So, if you like it truly Thai-style (very hot) be sure and mention it to the waiter. Go for lunch--they close at 8 PM.

The photo is of the Thai House outside of Bangkok, where we stayed for a few days on our last trip to Thailand. They have great cooking classes.
Posted by The Author at 4:18 PM 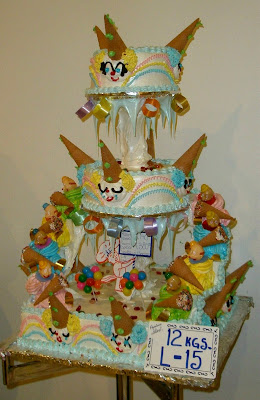 Here are links to articles I've written recently for
The News:

Calle Regina Renovated
Posted by The Author at 3:05 PM

As you may have read, there's a water shortage here in Mexico City. Taking advantage of the fact that many residents are away on vacation, officials have closed the taps in many areas of the city until tomorrow.
I live in a relatively small building (12 apartments) and I'd guess half of my neighbors are away, so we expect our tinaco (rooftop water tank) to last until tomorrow.
Back in the 1970's there was a water shortage in New York City. I remember mayor Ed Koch on TV, teaching me how to shave. "Don't let the water run. Just turn it on for a second to clean your razor." I still shave that way today.
In the past few days I've noticed a distinct change in my attitude about the stuff flowing out of the taps in my kitchen and bathroom. It suddenly feels precious.
Mexico lacks effective education on environmental issues. I just yelled at my neighbor who was washing his patio, the water flowing heedlessly over the floor. Last week I saw workers in my local park watering the dirt (no plants!). We need Ed Koch, although I think our own Marcelo Ebrard could do the job.
Today Mexico City is in the news. Tomorrow it might be your home town.
Conserve Water. Click here for some tips.
Posted by The Author at 10:01 AM 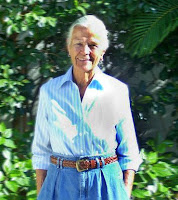 From an earlier blog post you may already know that my mother has joined the Peace Corps. The following is an article that appears in this week's Atención San Miguel newspaper that will tell you more.

What do you want to do when you’re all grown up?
By Jim Johnston

So what do you do?

In the case of my mother, who turned 84 last September, the answer was simple: join the Peace Corps.

It started with a magazine article my sister Eileen noticed and passed on to our mother. The Peace Corps, primarily an option for young college graduates, was looking for older volunteers. I doubt they were thinking of 84-year-olds, but it turns out there is no age limit. So mom went through the slow and rigorous application process and was accepted. She left for Morocco on March first.

She is now in a 3-month training period. Afterwards, she’ll work at a health care center, traveling to nearby villages to educate people about healthy living, pre-and post-natal care, and other related topics. “A glorified mother,” is how she described her new job to me, “I’ll be teaching young people how to take care of themselves. I’ve had a lot of practice at that.”

My mother, Muriel Gluck Johnston, was a wife and mother in New York’s suburbia in the 1950's. She raised six children, buried one, divorced a husband, worked at various office jobs, got her college degree at 65, then moved to Florida some years ago, supposedly to “retire.” She enjoys excellent health, which she attributes to good genes, exercise and a vegetarian diet. Her passion the past several years has been to travel, but something was missing: the need to be needed, a desire to be useful. After a life filled with responsibility, travel and leisure was simply not enough.

“When I was in college one of my friends entered the diplomatic corps and went to Rome. I was envious then and I guess I never got over it. I had passing thoughts of doing something exotic, like joining the WACS during World War Two, or signing with Aramco to work in Saudi Arabia after my youngest daughter entered law school. I filled out a few applications, but I was never motivated enough to mail them.”

My mother was raised to be an independent woman and had role models of strong older relatives. “My paternal grandfather taught me to change a tire and lots of other practical thing girls my age weren’t supposed to know,” she said. “I have a photo of my grandmother Emilie in her hiking outfit: knickers, boots laced to the knee and a bomber jacket. The neighbors were scandalized by her bicycle-riding..."at her age!" they said. This was in the thirties when women, especially elderly ones, were expected to sit in rocking chairs and knit. Emilie was 88 when she died of a stroke, supposedly brought on by altitude change while mountain climbing.”

While there are not many octogenarian Peace Corp volunteers, she’s not the only one. Recently an 84-year-old science teacher was sent to Ghana, and a woman in her eighties is in China. The Peace Corps has realized that mature volunteers are a good balance to the newly hatched college grads who make up the base group. As noted on their website, “Many volunteers find their age to be an asset, as people of developing nations respect and appreciate the decades of work and wisdom older volunteers bring to their communities.”

My youngest sister thinks she is out of her mind, but otherwise mom’s gotten nothing but praise and support. All of her kids get the pleasure of seeing people’s reaction when we tell the news. Pure inspiration is a rare and powerful thing.

While others may have some doubts or fears about such an undertaking, my mother does not. “It’s never occurred to me to be fearful, or to worry about being sick or alone. In all my travels, concern for my safety never entered the picture. My only reservation is the ability to learn the language. I’m still not sure what it will be, probably some tribal dialect of Arabic. Memorization has never been my strong point, so I hope it won’t hamper my efforts. But in general, I’m thrilled. I wake up in the middle of the night lately giddy with excitement.”

Go to http://muriel-morocco.blogspot.com / to catch up with Muriel in Morocco.

Jim Johnston, artist and writer, is author of Mexico City: an Opinionated Guide for the Curious Traveler. He has written articles for the Christian Science Monitor and the The News (Mexico City) on food, travel, vampires and opera. He lives in Mexico City with his partner Nick Gilman. His blog is www.mexicocitydf.blogspot.com; his website is www.jimjohnstonart.com.

To learn more about the Peace Corps, visit http://www.peacecorps.gov.

The website has general information and even online applications, but the links to videos and hundreds of volunteer journals are perhaps most interesting.

The Peace Corps traces its roots to 1960, when then Senator John F. Kennedy challenged University of Michigan students to serve their country in the cause of peace by living and working in developing countries. From that inspiration grew an agency of the federal government devoted to world peace and friendship. Since that time, more than 195,000 Peace Corps Volunteers have served in 139 host countries to work on issues ranging from AIDS education to information technology and environmental preservation. Today’s Peace Corps works in emerging and essential areas such as information technology and business development, and committing more than 1,000 new Volunteers as a part of the President’s Emergency Plan for AIDS Relief. Peace Corps Volunteers continue to help countless individuals who want to build a better life for themselves, their children and their communities.