For those of you who know me only through this blog or my guide book to Mexico City, it may be a surprise that all this has just been a sideline--although one that took me on quite a long and varied journey.

My first, and longer, career is as a visual artist.

After a brief and stultifying stint as an office worker in New York City in my early 20's, I began my professional life as an artist selling pottery at street fairs. Later I branched out into painting, sculpture, industrial and furniture design, and printmaking. I've also worked as an amateur architect and have designed a dozen houses.

Since moving to Mexico City almost twelve years ago my writing has vied for attention with my art. I have continued to work in a quieter way, having completed a few private commissions, but not showing publicly. So, for the first time in more than ten years I've cleaned up the studio and freshly painted all the walls white, and hung up my recent work to exhibit.

You can see more recent work on my FB page: ESTUDIO TONALÁ
(please LIKE to page to receive updates)
Previous work can be seen on my website:  www.jimjohnstonart.com 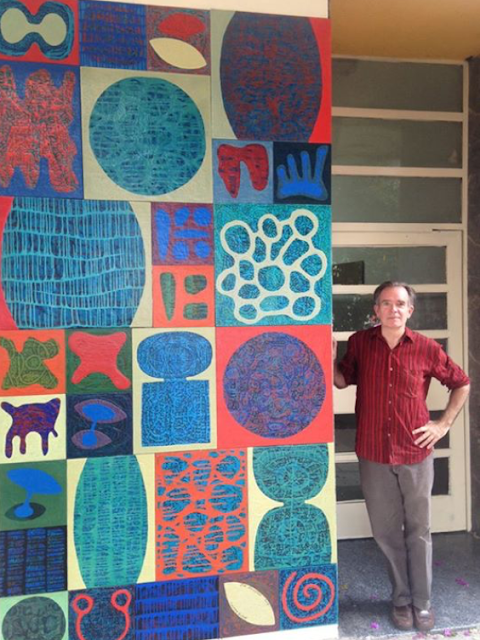 After November first I will be in India for two months working on a writing project. 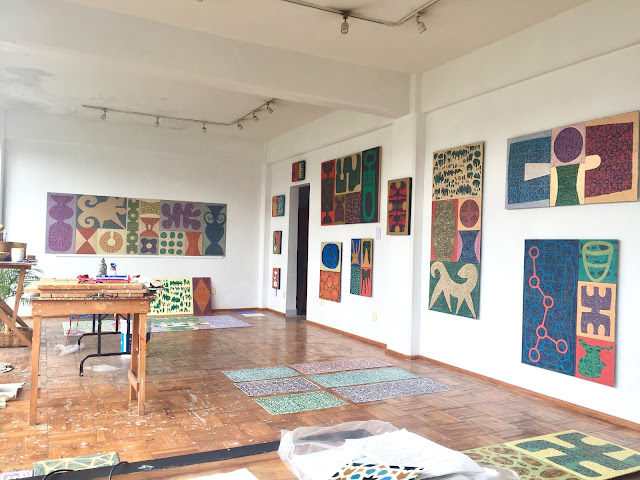 I was on a train in Massachusetts, noticiing the first signs of autumn color, when I got the text from my partner Nick in Mexico City: "Another earthquake!"
I was travelling to Keene, New Hampshire, where my father lives, to celebrate his 97th birthday. He wanted Chinese food. Between bites of Mu Shu pork and General Tzo's chicken I kept checking my phone. As the horriffic images kept piling up on Facebook, I realized the tragedy that was unfolding back home. The urge to jump on the next plane was mixed with relief that I did not have to be a witness to death and destruction.
As I watched the vast outpouring of aid offered by my fellow Mexicans, I felt some relief at not being part of the rescue efforts. But as I observed and spoke to my father over the next 24 hours, I realized I was part of another kind of rescue mission: dad had reached the point where he could no longer take care of himself.
He had been in the same apartment building for almost 40 years, and aside from a few isolated episodes (he broke his shoulder last summer and had meals-on-wheels delivered for a few months),
he'd led a fiercely independent life. He did all his shopping, cooking, cleaning and laundry. And he still drives. My sister had managed to get him to hire a home aide a while back, but after a few months he fired her. "I don't need her. I like doing my own laundry," he told me.
Over the past 6 months, however, I'd noticed a slow but steady decline in his physical powers, especially walking. And when he admitted it, I knew it must be serious. When a stoic complains, it's time to listen.
The process of convincing him to move into an assisted living facility--something he swore he would never do--was not easy. But I wasn't captain of my high school debate team for nothing.
Within four days I had packed, given away, or thrown out all of his possessions, moved what was left to his new place, and set it up to look like home. While dad is definitely not 'happy' yet in his new abode, I have no doubt that he will be soon. And all of us who love him are left with the security that he is well taken care of.
For my newly homeless friends in Mexico City (I count 8 so far) the future is less certain. I returned Sunday night and spent yesterday walking around Condesa and Roma, surprised at how 'normal' everything seemed--until it wasn't. Most buildings appear unscathed, but suddenly the sight of cracked concrete, broken windows, a wall of plywood where a building once stood yanked the breath of of me. Groups of rescue workers in yellow vests and hard hats pass by, ambulance and police sirens screech, and helicopters rush overhead. These are the pain filled moments that mix with the beauty of life, which still abounds here. I've had wonderful encounters with neighbors I formerly only nodded hello to, everyone eager to share--and hopefully disperse--the fear and anxiety that overcame them all as the earth moved below their feet. The most uplifting thing I saw yesterday was a group of city workers planting flowers along the sidewalk on a traffic-clogged street in La Roma.
We are living in an alternative universe where sleep is evasive and emotions ride the waves. Who knows how long it will take for before the echo of tragedy fades away? Whatever the case, September 19, 2017 will remain one of those before/after dates for generations to come.