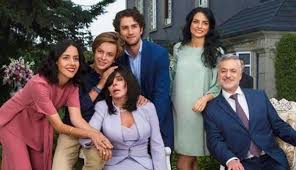 When I first arrived in Mexico and began to study Spanish, a teacher recommended I watch a popular soap opera to improve my language skills. 'Te Sigo Amando' was wildly popular then. When it came to an end (as Mexican soap operas do, with final episodes that rival Wagner's 'Gotterdammerung') the country practically came to a halt as everyone sat glued to their televisions.

A new offering on Netflix, 'La Casa de Las Flores', may reach an even wider audience, since you can watch it any time. Absurd, over-the-top situations abound--I found myself laughing in disbelief several times watching the first episode. There's nothing subtle going on in this story of a wealthy Mexico City family, their secrets, lies and passions. But it sure is fun.

The show is in Spanish, but has Spanish subtitles, so it's great for those trying to attune their minds and ears to colloquial spoken Spanish.

Take a look at the trailer: https://www.youtube.com/watch?v=I-z8-ZEiVw0
Posted by The Author at 10:19 AM No comments: