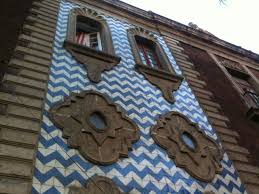 OPEN HOUSE CDMX, a festival of Mexico City architecture, will take place this weekend, September 28 and 29.  More than 80 venues--many never before accessible--will be open to the public. You can see the works of some of Mexico City's most famous architects.

https://ohcdmx.org
Posted by The Author at 12:15 PM No comments: 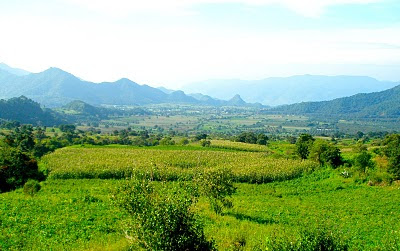 One way to deal with the craziness of living in Mexico City is to escape to the country once in a while, and my favorite place to go is Malinalco, a magical spot hidden in the mountains of the Estado de Mexico.

The Aztec goddess Malinalxóchitl thought the place magical enough to call it home, and the Mexican government officially endorsed her opinion when it included Malinalco in its Pueblos Mágicos program, which protects and promotes small town culture.

“I knew it was magical the first time I saw it more than 20 years ago,” said Adriana Pérez de Legaspi, one of a small group of Mexico City residents who have weekend homes here, and who offers tours and cooking classes in ‘pre-Hispanic gastronomy’.  “There’s a feeling of something ancient here, something secure and grounded. ”

Located 110 km (65 miles) southwest of Mexico City, Malinalco feels like another world. It’s nestled in a lush, semi-tropical valley where flowering shrubs, tumbling vines, banana and palm trees grow in jungle-like abundance, and undulating mountains frame every vista.  Adobe houses with red-tiled roofs and painted stucco walls line the streets around the main plaza; an Aztec shrine, carved into the hillside, presides over the valley. 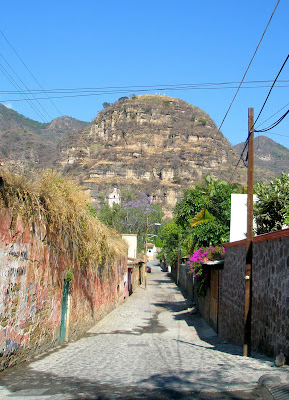 The division between town and country is blurred here. There’s only one asphalt road, bisecting the town east to west.  Other streets are of cobbled stone, fading off into well-trodden dirt pathways, old creek beds, and winding animal tracks.

Exploring the hills around the town you’ll find rock carvings and paintings that date back to 600 B.C.  When the Aztecs showed up in the 1400’s they built a ceremonial site known as the Cerro de los Idolos (Hill of the Idols).  A zigzag staircase of 427 steps leads to the site, where priests once offered sacrifices to the Aztec gods (closed Mondays). 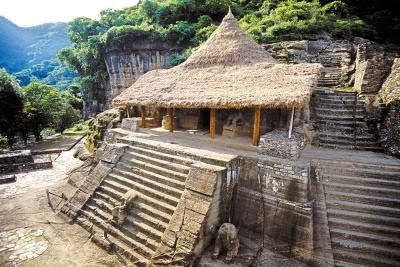 Down below, just off the main plaza, is another sacred spot, the imposing Church of the Divine Savior, founded by Augustinian monks in 1543. The adjacent cloister is painted with murals depicting local flora and fauna, a mix of indigenous and Spanish artistic influences. 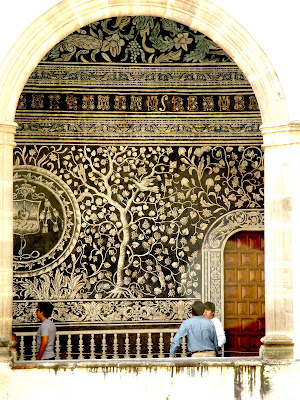 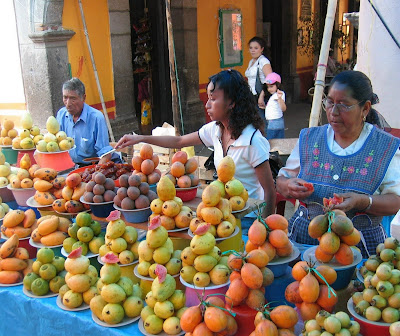 Several street food stalls stand against the high stone walls of the church yard.  Locals and tourists alike line up for specialties like tacos of cecina adobada (dried, spiced beef) or tlacoyos de haba (oblong corn cakes filled with fava beans).  The enchiladas verdes I ate at one stand were the best I’ve had in Mexico. The ice cream at Malinalli, across the plaza, is made with those exotic fruits you saw in the market like mamey, zapote, or guanábana.  There are several 'nice' restaurants, too, like Los Placeres on the plaza across from the church, which has great food and atmosphere. The local tamales, sold from baskets by women in the market, are flat--they look like they've been run over by a truck--but are delicious.

Malinalco, whose population is around 7000, is primarily a town of agricultural workers, but it’s been a getaway for privileged city residents for decades--in a flea market in Mexico City I found a travel magazine from 1948 with a cover story on Malinalco. Smaller and less developed than weekend retreats like Valle de Bravo and Tepotzlán, it has a few high-end hotels, a handful of good restaurants, two art galleries, and a private golf community. At the elegant Ollinyotl holistic center (https://www.ollinyotl.com.mx) you can get a massage, take a yoga class, or wander in their meditation labyrinth.
Politicians, corporate executives, a museum director and even the grandson of Diego Rivera have homes here. But most of the wealth is discretely hidden behind high, bougainvillea-clad walls, and on the roads around town you’re more likely to encounter a stray cow or a herd of sheep than a Mercedes Benz.

“It’s Mexico’s best kept secret, “ says Ada Marie King, a travel consultant, who along with her architect husband, Lynn Wallach, were among the first foreigners to buy property here.  “Mexicans have heard about the town, but the lousy roads keep people away.”  Indeed, my arrival by car felt a bit like slalom skiing as I swerved frequently to avoid big potholes. But the difficulty in getting there heightens the pleasure of arrival. 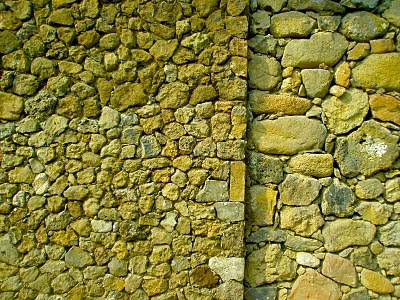 Like the mythical Shangri-La, Malinalco seems to exist in another time. Although you are able to connect to the internet and find a decent cappuccino, it’s the feeling that nothing has changed for centuries that makes this place truly magical.

**************************************
TRAVEL TIPS:
By car from Mexico City, head toward Toluca (toll road), exit at km 32 (toward Chalma), then follow signs to Malinalco (MX15 is the road number).
By bus from Terminal Observatorio, there are a few direct, second-class buses in the afternoon.  Otherwise take a bus to Chalma (they leave every 30 minutes) and then a taxi (40 pesos) to Malinalco, 10 km away. Look for the Aguila Bus Line.
There is a kiosk in the main plaza where you can get tourist information.
Holistic Spa: http://www.ollinyotl.com/malinalco.html
Pre-Hispanic Gastronomy Tours: https://www.facebook.com/adrianaperezdelegaspi
Hand woven rebozos: http://xoxopastli.blogspot.com/
Wednesday is market day when the streets fill with vendors of everything from avocados to zippers—lively and fun.
August 6th is the Feast of San Salvador, the town’s biggest fiesta. There's lots going on during the week leading up to that date.
Airbnb.com offers a number of houses in Malinalco, 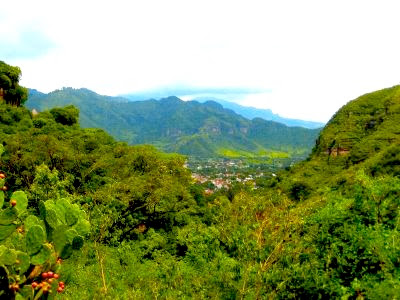 View of the vally of Malinalco 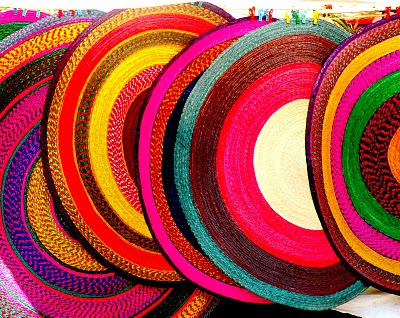 Hand-woven mats sold in the market
Posted by The Author at 11:16 AM

Labels: Malinalco, MexicoToday, Opinionated Guide, Pre-Hispanic Food
Posted by The Author at 8:33 AM No comments: