CREATING A PIED-Á-TERRE IN MEXICO CITY

Colonia Roma (see my last post) has become one of the most desirable neighborhoods in Mexico City, and it's attracting increasing numbers of foreigners. I wrote a previous post about an American/French couple who retired there.

When my friend Brad (an American who lives in Mexico and New Orleans) first told me about his new apartment in Roma, I thought he was joking.

“It’s on top of an fabulous art-deco building. You walk down a narrow alleyway, past the old incinerator, up a rattling metal staircase, then zigzag through lots of laundry cages to get there. It’s got five rooms and a tiny balcony that overlooks a synagogue. Oh--and it all measures 32 square meters.”

Five rooms? Thirty-two square meters (about 350 square feet)? It sounded like a dollhouse to me. I was skeptical.

Brad found his apartment by walking around the neighborhood and writing down the phone numbers of any ‘for sale’ signs he saw.

“I covered every street in Roma. I looked for about 10 days to find this apartment. It’s the only building in the neighborhood designed by Francisco Serrano, the architect of many art-deco gems in La Condesa. Unfortunately, the building is in a sorry state. Nobody pays maintenance, so nothing gets repaired. But I’m up on the roof in my own little world. It was pretty awful when I found it,” he confessed. “But the place had good bones and the price was right.”

As a foreigner, he needed a permit, which cost about 600 dollars, to buy the property, . “In general, the buying process went quite smoothly. I had to find three Mexican citizens to vouch for my character. That was a little odd but it all worked out, and now I have the escritura (deed) in my name.”

Three months later he invited me over for champagne to celebrate the completion of his renovation. After climbing and zigzagging to his rooftop hideaway, I was amazed to see what a combination of daring and imagination had achieved. This doll’s house is a real home. 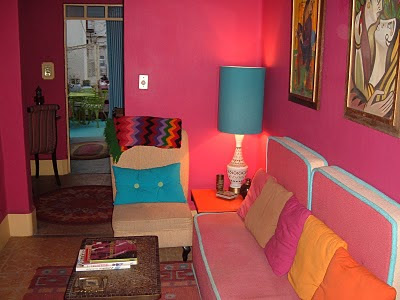 The apartment has a funky, retro look, while maintaining the integrity of the original architecture. The boldest move was to paint the living room, dining room and bedroom all one color. Even the ceilings are a vivid pink (Comex bugambilia).

“I jumped when I first saw the color chip,” Brad confessed. “But once the apartment was furnished, and lit up with carefully placed lighting, it took on a warm glow. I painted the ceilings the same color so there wouldn’t be lines to show how small the apartment really is.”

The tiny bathroom is completely covered in half-inch glass tiles—six different colors in a random pattern that creates a lively feel. The tiles undulate over pipes and bumps in the wall, giving it an organic, slightly humorous look. 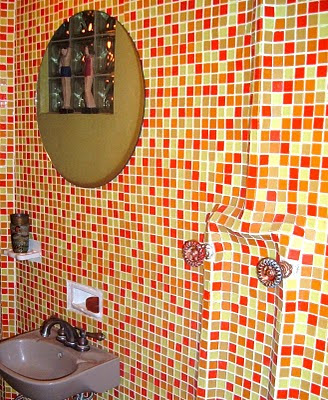 A small balcony faces the street, and there's an outdoor dining area in the jaula, a fenced-in area that was used to house the gas tanks and to hang laundry. "Having a bit of outdoor space makes a huge difference," said Brad. "Otherwise the place might feel claustrophobic."

The furniture is an eclectic mix gathered from flea markets and antique stores. “Some things were really inexpensive, like the sky-blue floor tiles in the kitchen--they practically gave them to me. What I spent the most money on, by far, is the portrait over the sofa of an Indian girl by Alfonso X. Peña, a contemporary of Diego Rivera who hasn’t yet gotten the recognition he deserves.” “I’m not sure I’d have the nerve to do this kind of thing anywhere else but in Mexico. There’s something about the light, about the culture in general, that makes strong colors feel natural. It’s one of the things that keeps me coming back. And I love living in Colonia Roma--it's constantly changing and getting better all the time.”

Brad spent about $30,000 to buy his apartment and other $15,000 to renovate and furnish it. Once you own property in Mexico City the expenses are reasonable, e.g. his property tax last year was a whopping 195 pesos (about $16 US--yes that's sixteen dollars, not a typo).
If you're thinking of moving to Mexico City check out my previous blog for more tips.
Note: Read my review of Colonia Roma's hip Hotel Brick at www.luxurylatinamerica.com--a great place for a drink and people watching.

Wow! What a lovely stuff and I love it. I was amazed with the photos, it looks great. Thank you for sharing.