Introduction to my book 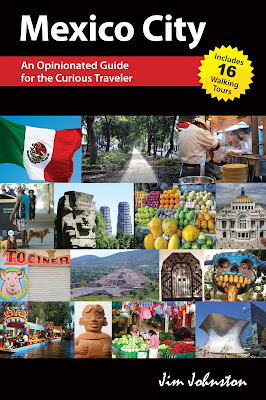 Introduction from ‘Mexico City: an Opinionated Guide for the Curious Traveler’ by Jim Johnston (Third edition, 2015)

When I tell people I live in Mexico City, the response is often bewilderment shadowed with trepidation. I’ve called Mexico City home since 1998. In that time I’ve seen it grow and change—mostly for the better. As one of the biggest conglomerations of human beings on the planet, its sheer size can be daunting, and everybody (especially those who have never been here) has a crime or a pollution story, the grittier the better. But as a resident explorer of the city for more than 15 years, I have come to know it well, to manage its complexities, to make it enjoyable, even delectable.

What started out as a collection of notes on my discoveries around town to share with friends has grown into this guide, a love letter to my home town, known here simply as Mexico or el DF (el day-effay), el Distrito Federal. It’s a biased book, I admit, rooted in a love that accepts many imperfections without overlooking them. I include a number of popular tourist sites that nobody should miss, but also lesser-known places, neighborhoods, markets, and even a specific street corner where you will find the best tamales. I don’t give long descriptions of the most famous sights—I’ll assume the curious traveler can figure that out—but I try to lead you into less likely corners. My opinions are colored by my professional life as an artist and architect, my interest in good food, and my love of great cities in general.

Mexico City isn’t really beautiful like Paris or San Francisco—its gems lie in a matrix of urban hysteria. It can delight and assault the senses with equal force, and teasingly hide much of its allure behind massive old walls. With population estimates as high as 25 million, the tumult of noise and activity can be overwhelming, and the extremes of wealth and poverty unsettling. There is a great deal of sensory input, and it takes some effort to sort it all out.

Unlike more demure European or American cities, Mexico pours out onto its streets with unrestrained exuberance. Color is everywhere: radiant magenta, acidic lime green, or screeching yellow will suddenly appear on a wall or a shirt, a balloon or a piece of fruit. Advertising is boldly painted directly on building walls, creating a delightful, if disorienting, overabundance of visual information. Hand-hewn stones, irregular surfaces, and cobbled streets give the city an earthy physical texture. Cracks, bumps, gaps, and tilting walls, evidence of many earthquakes, make the city seem like a child’s drawing. And with zoning laws often ignored, startling juxtapositions occur: a stately colonial building looms over a 60’s gas station, or a high-rise apartment complex cuddles up to a humble taco stand. It is the capital of the unexpected.

Mexico City has a great sound track, and I often stop to listen—it’s a very musical country. Organ grinders wander about; it’s an old tradition that arrived with Italian immigrants a century ago (give a tip—it’s their only source of income). Singers accompany themselves with guitars and accordions in the streets, in restaurants and in the metro. Every so often a marimba band will appear on the sidewalk in front of my house. The ‘One Man Band’ is a regular in the neighborhood where I work, his crude fanfare for trumpet and drum guaranteed to wake you up from an afternoon slump. There’s a surprising number of birds here, and on quiet holiday mornings I’ve been awakened by their song.

Market vendors have their particular calls and cadences (called pregones), knife sharpeners have their distinctive whistle (not to be confused with the whistle of the camotero who sells cooked sweet potatoes in the evening). Even the garbage collectors have a particular sound, the clanging of a metal bar, to announce their arrival. The recorded cries of “fiero Viejo” (old junk metal) collectors, or “tamales Oaxaqueños”, with their combination of humor and annoyance, are well known to all residents of Mexico City. Many foreigners find the noise level unsettling, but volume and cacophony are more often experienced as pleasure than annoyance by Mexicans - visit Plaza Garibaldi one night to hear the mariachis and you will know what I mean.

The city smells of life in earthy ways not found in more sanitized places. Open food stalls are everywhere: a pervasive aroma of corn tortillas, roasting meats, chilies, and garapiñados (nuts cooked in caramelized sugar) are just a few of the pleasurable smells that mix with the noxious exhaust of too many vehicles or clogged drainage pipes. Air quality has been steadily improving over the past few years, however, and there are many days with clear blue skies.

Mexico City has a bit of an old-fashioned feel; it is comfortable with its long cultural heritage, not terribly concerned with trends or fads. Old style barbershops, wooden-door cantinas, dowdy ladies’ corset shops, and glass-bottle pharmacies are found throughout the city, some of them untouched for 50 years or more. Modern Mexico City also has plenty of slick, high-rise stuff, and lots of super-rich people living behind walls, mostly in the western suburbs. Chic hotels, elegant restaurants and designer stores are here, but they tend to have the same global feeling as elsewhere. It’s the energy of living tradition that makes this city distinctive.

You can feel a deep sense of ancient history here. The faces of many people, the food, and place names such as Chapultepec, Popocatepetl and Nezahualcoyotl reflect its pre-Hispanic past. A sense of the world not changing and the embrace of history give this city a special character, but with the forces of globalization pounding at the gates, I don’t think it will last much longer. It’s a good time to visit.

Mexico City is not for the faint-hearted traveler. The air is polluted, the traffic is beyond belief, it’s in an earthquake zone, and not far from a smoking volcano. You don’t come to relax or “get away from it all.” You come to be seduced by a flourishing 700-year old culture, by people whose hearts are easily opened, and by the sheer audacity of it all. Keep your senses alert and you, the curious traveler, will be richly rewarded. I hope this book will enable you to discover Mexico City, and to love it as I do.

To order the book from Amazon, click HERE.
Posted by The Author at 10:44 AM

Is this a new edition this year?

Yes, it's the third edition, which came out in April 2015. It has approximately 30% new material.

I lived in DF from 1968-70 as a college student. I lived in Anzures and did lots of traveling on weekends and during school breaks. DF "only" had 8 million people then. I was there for the Olympics and the student shootings in the Plaza of Three Cultures, I was there when the metro opened and when they started to find Tenochtitlan ruins while building the metro tunnels. It is a city I love. I have travelled to other countries and seen lots of museums, but the Anthro museum in Chapultepec Park will always be my favorite in the world. Last year I flew into DF airport and the flight went right over the museum. I was so thrilled to see the view from the air.
I just bought your book as I have a few days to spend there this fall. Thank you, I can already tell that it will be useful as there are so many changes since my last visit.

Kudos on doing so very, very well in Amazon rankings. You must be very proud as it is no small feat! Joseph Toone, SMA, Gto.