LUCHA LIBRE—Wrestling with what it means 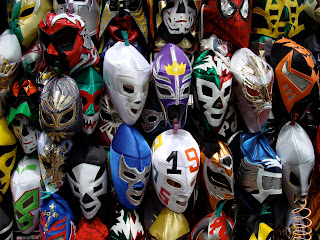 
One of the great opportunities of being an expatriate is the chance to view life from distinct vantage points. A poster I saw here in Mexico City the other day got me thinking. It was an ad for “Lucha Libre--La Experiencia” which I thought had an elegant sound to it, like the title of some romantic foreign movie. But as you may know, lucha libre is that curious form of Mexican wrestling in which men –and occasionally women - dressed in flashy Las Vegas style costumes and horror movie masks stomp, throw, bend, crush, squeeze and mangle one another violently around a ring, while the crowd roars its approval.

I confess I’ve never quite understood the allure of it all. But I recognize that the sport- if that’s the right word- is extremely popular here and is definitely an international symbol of Mexican culture. (Check out Julie Carmann’s blog for a true fan’s point of view).

My strongest memory of lucha libre is of the crowd. It was very much a family event; people of all ages, even babies were there. Everyone seemed to be in motion, gesturing toward the ring, screaming at the wrestlers, hopping up and down the aisles.

The lady in front of me looked like somebody’s sweet old grandmother - the woman who sells tortillas at my local market. That is, until she stood up and started screaming at the top of her lungs “Mátalo!, mátalo!” (“Kill him, kill him”). Something about the wrestling match seemed to unleash a base animal instinct, although I never worried that it would pass beyond the verbal.

A few weeks ago, in New York City, my old home town, I was riding the subway when I witnessed an altercation between two women. It appeared that one of them bumped the other with her elbow. Anger flared, words darted. The scene reached its grand finale as one woman sneered, “You’re a worthless piece of shit!” Turning up the volume, her adversary spit out the last line: “YOU’RE a worthless piece of shit!”

No one else in the subway car seemed to notice—just another day underground. I watched in disbelief as these two people, having met only 90 seconds ago before, descended the ladder of civilized behavior to its lowest rung—in public no less!

I could not imagine such a thing happening in Mexico City. I find Mexicans to be generally polite, kind and courteous. In fact, in the 12 years I’ve lived here I can only recall two incidents in which I saw people raising their voices in anger to one another. Both cases involved damaged cars, so at least there seemed to be a good reason for it.

Perhaps this means that Mexicans are calmer by nature than New Yorkers. Or do they just save their screaming until they get home or attend a lucha libre match? Should the mayor of New York build a lucha libre arena in Central Park?

What do you think?

For more information on this upcoming event, which takes place in Mexico City on July 23 and 24, see the website: http://www.luchalibrelaexperiencia.com/

We NYers are only calm when we're sleeping or dead. :-) AW

Perhaps Mexicans release their aggression by playing their music at an earsplitting level, keeping their dog tied in the sun on the roof and encouraging it to bark day and night, and setting off firecrackers at three in the morning on all possible occasions. Etc.
Just a thought.

You're right, most people in México do not express anger or resentment in public but DO "explode" at home or with people they can trust! (check the high rates of domestic/psycological violence).

A good way to "get things off your chest": poor economic situation and living conditions, social segregation, etc. is to vividly complain within a group. We don't always take action towards the resolutions of problems.

Could we track down this "anonymous behaviour at "la lucha libre" to the times of La Conquista, as a "safer" way to express feelings?

It is bizarre isn't it. I've also found Mexicans to be very non-confrontational and without a general disposition to violence. In my six years in DF I saw just two fist fights. I say fights. Hand bags at dawn would be a better description.

As I exited a subway car, I witnessed the tail-end of a chilling scene the last time I was in DF--between two women, in their mid-thirties, I'd guess. They were screaming and scratching one another's faces and continued to do so until the closing train door separated them. The one who had exited the car was with her husband and daughter of perhaps 6. The child had her head down and the husband kept giving disbelieving, disgusted looks at the woman, whose face was badly scratched up.

This scene was memorable in that it seemed such an impossibility in Mexico--the land of such courtesy.

Could we track down this "anonymous behaviour at "la lucha libre" to the times of La Conquista, as a "safer" way to express feelings?

Since Luche Libre has only been around since the late 1930s, I'm afraid not. Masked ritual, however, goes back a long, long way, as does ritualized violence.