When I first visited Mexico City in 1989 I found myself in a taxi driving in a circle, overlooking what appeared to be a set for a movie about the apocalypse, or an enormous, circular pin ball machine. I clutched my seat and watched wide-eyed as cars sped into the swirling traffic from multiple entry ramps, lights flashing, horns honking, all of it dwarfed by a towering image of a Coca-Cola bottle and massive billboards. It was frightening and fabulous, a one-ring urban circus. 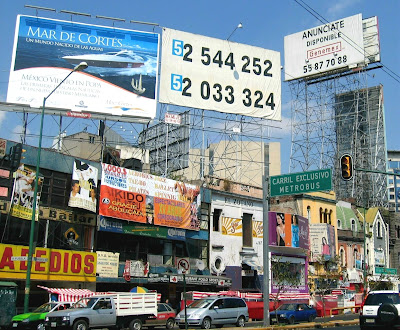 (Note the Porfirato buildings at the far right, a hint of the past.)
I later found out that it was called the Glorieta de Insurgentes, a huge roundabout built in the 1960's at the edge of the Zona Rosa, right in the heart of Mexico City. In the pit below the traffic circle is the entrance to the Metro Insurgentes and one of the city's busiest bus stops. It's estimated that a million people a day pass through the Glorieta.
The glory days of the Glorieta--if there were any--have passed. It's a big architectural wart now, surrounded by porn video stalls, a school that offers free haircuts, a shop selling sexy disco outfits, a clinic where you can see a doctor for 25 pesos. There are some interesting Mayan style relief tiles at the metro entrance, but that's about the only attractive thing there is. In spite of it all, the place has a compelling energy I've always loved, especially as the sun sets and street lights add their disorienting effect.
This plaza has lots of potential, but it falls short of being a truly great, glitzy urban space like New York's Times Square, London's Picadilly Circus, or Tokyo's Ginza. There's not enough beauty to make it really good, and not enough ugly to make it really 'bad' (in the Michael Jackson sense).
The city keeps trying to eliminate billboards, but I think the place needs more of them, not less, along with some flashing neon and strobe lights, maybe a fountain or two, or a ferris wheel like the one in downtown Osaka.

We now have bike paths, pedestrianized streets, a projected 'high-line' elevated park. Thomas Glassford, an American artist who lives here, recently completed a project in Tlatelolco, covering an entire building in a mesh of neon lights. Mexico City is putting a lot of energy into giving itself a modern, user-friendly, makeover. It's a great time to be living here.
A new proposal is afloat to transform the Glorieta de Insurgentes. The idea is to turn it into a massive art gallery, an open-air museum, by having young artists integrate paintings, sculpture and photography into the commercial mayhem. The photo below is a digital creation of one possibility. The article
I found (see link) seems fairly vague about how all this will happen, but it's a good start. Are you listening Carlos Slim? 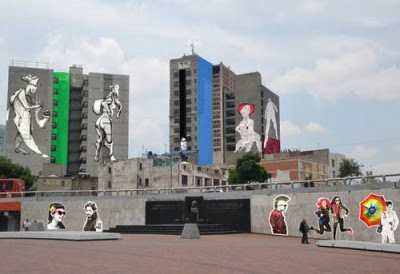 Photo by Arturo Alvar | La Jornada
Article in Spanish about the Glorieta http://www.gatopardo.com/detalleBlog.php?id=155
Posted by The Author at 8:28 AM

I agree. When flying into DF at night recently, I noticed a rather large building lit entirely in pink neon. From the air it was fabulous. Does anyone know what it is? Maybe something like this for the glorieta?

I guess you are referring to the UNAM building (former Secretaría de Relaciones), near Tlatelolco?

Could it be the Plaza de Tres Culturas neon art installation, which I may have read about here?

Funny I have been asking the same question when I saw it in January...

Makes me nostalgic. Hope is that the energy you talk about will attract artists and Mexico developers.

When emerging from the Metro at Glorieta Insurgentes, I still feel somewhat like a pinball, whirling about, looking for the Calle Jalapa exit. I am getting better at that.

Thomas Glassford on the outside...and a fantastic art collection on the inside: Museo Colleccion Blaisten. Really outstanding Mexican Art collection that should not be missed. Really!

I have always loved the public art and galleries in DF. Wish I was there now! I like the idea of using the space of the glorieta for public art. Mexico City is one of the most interesting and beautiful cities I have ever lived in. To me the Glorieta Insurgentes is really a sort of DF style Ginza or Times Square. I've never been to Ginza but really Times Square just seemed like the same stuff, but with more cashola. I'd rather check out free haircuts and disco suits than another McDonalds or Sony Store any day.

The digital rendition of what it might be is entirely lacking in people, which is what makes Glorieta Insurgentes interesting in the first place.

In my opinion, they need to move the vendors out of the walk ways and into the middle of the Glorieta. That would be an improvement.

Kim G
Boston, MA
Where we think it's fun to hang out there and people-watch.