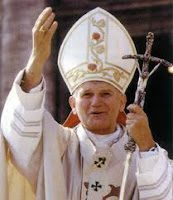 I've lived in Mexico for fifteen years and occasionally settle into a complacent feeling that I really know what's going on here. And then I see something like this news headline:

and I begin to question it all over again.

The blood, displayed in a new handcrafted reliquary, along with other items relating to the pope's life, wil

l be on display in Mexico City's Cathedral from Sept. 5-9 and will travel around the country through December. John Paul II, who was beatified (first step toward sainthood) in May, has made five official visits to Mexico and is a figure of adoration here.

The connection between religion and blood--large quantities of it--has a history in Mexico that pre-dates the arrival of the Spaniards. You can find long descriptions of Aztec human sacrifice, literally heart-rending, in early missionary chronicles. Graphic images of a blood-drenched Christ are common in churches here. And of course, the 'blood of Christ' is an essential element of Catholic mass everywhere.

According to Rev. Manuel Corral, public relations secretary for Mexico's Council of Bishops, "In the perception of a Mexico plunged into terror, pain, hopelessness, anguish, vengeance and rancor as a result of insecurity and violence ... the veneration of the relics will be an opportunity for the baptized and pe

ople of good will to turn their eyes to God."

I received a Catholic education as a child, but

it did not prepare me for the Church I found in Mexico. The first clues that something was different were the crepe paper and balloon decorations I saw in a chapel in Oaxaca. The sightings of the Virgin Mary in a tortilla or on a paving stone in the metro were new to me, as were the dancers clad in Aztec attire that attend many religious festivals, and the pilgrims crawling on hands and knees to reach the Basilica of the Virgin of Guadalupe. There's a rambunctious, slightly pagan aspect to religion here, something that reaches back into the pre-Hispanic past, searching beyond the gospels, into the codices, the glyphs, to where the plumed serpent and the robed madonna meet.

The Bishops' Council has asked organized crime groups in Mexico to give the folks a break--no kidnappings, shootings or decapitations, please--in the presence of the sacred blood. Nothing else seems to be working, so why not? A lot of blood has been shed in the 'war against drugs' in Mexico. Maybe it's time to just stop and meditate upon it.

Disclosure: I am being compensated for my work in creating content for the Mexico Today program.
All stories, opinions, however, are completely my own.
Posted by The Author at 9:41 AM

If the late great Empire(The United States) has taught us anything, it is that killing doesn't work and it doesn't help....Yet our leaders cling to the magical belief that weapons will make us safe and strong...

Nice piece of writing and connections made. The power of blood - both positive and negative. Luisa