Recently, my friend Roberta was viewing the Mexico City marathon from her balcony in Polanco. She watched the runners, the cheering crowds, and a few folks dressed as clowns as they passed by. Wanting to share this simple pleasure of life outside her window, she sent an email with photos to several friends back in the States.
"A few wrote back really surprised," she told me. "Weren't you afraid something would happen, like a stray bullet hitting you or a bomb exploding?" one of them wrote. "They don't expect anything normal like a marathon to be going on in Mexico City."
Hearing this story reminded me, once again, of the skewed impression many people get of life here in Mexico City by reading and watching the news. News media feed on the sensational. A headline that shrieks about eight decapitated bodies found in a cantina makes more compelling copy than one that describes several thousand people running 26 miles with their heads attached.
But the truth for me and Roberta is that life in our big city is much more peaceful, pleasant, and just plain normal than what the media suggests. So I thought to myself, "Hey, I worked for a newspaper once. I'll just go out and find some headlines myself, normal headlines about my Mexico City."
The sun finally made an appearance today, so I set out with my camera (carefully hidden in a plain bag, along with my journalistic license) to see what I could find. I recorded all of what follows within a few blocks of my home in Colonia Condesa. If you see any more good headline news out there, let me know! 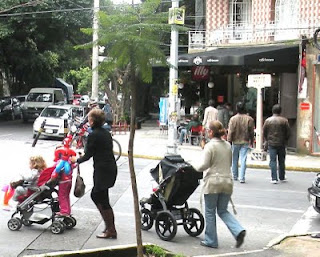 TWO WOMEN PUSH STROLLERS ACROSS STREET--ALL FIVE LIVE!
"It was quite an ordeal, but we're much better now," said Leticia Burbujas, 32, one of the survivors. "The kids are so young they probably won't remember it." 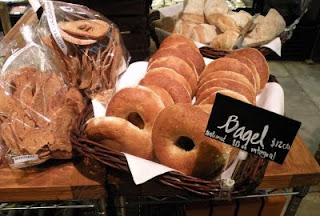 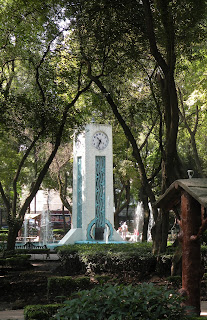 CLOCK IN PUBLIC PARK TELLS CORRECT TIME
For more than a year now this clock in Parque Mexico has been giving the right time, and neighbors are not happy about it. "How can I explain that I'm an hour late when I have that thing staring at me," complained dental assistant Marta Pantorrilla, 39... 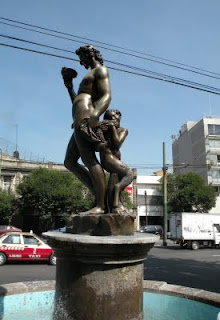 AMID SWIRLING TRAFFIC, SEXY STATUE IS IGNORED
"It's disgusting," complained Evelyn Wright, 61, formerly of Boston, whose living room window has a view of the statue. "There are naked statues all over Colonia Roma. This one has a penis! Not as big as that David statue in the Plaza Rio de Janiero, but it still isn't right! These Mexicans just don't care!"...

BLONDE FOREIGNERS DRINK FRESHLY SQUEEZED ORANGE JUICE
When asked their names the two fled, but Ciro Sanchez, 16, who was squeezing oranges at the time, had the story. "They were very concerned that I not put ice in their drinks," he noted. "But they seemed happy. One of them told me, 'This tastes just like orange juice--only better'"... 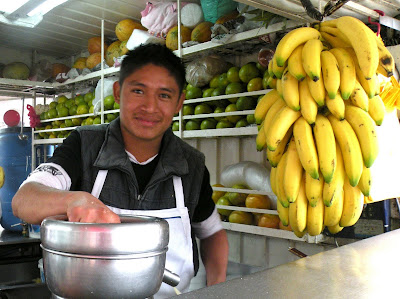 Hilarious. Came here at the recommendation of my friend Maura.

Hahahahaha!!! Love these headlines! I could use this kind of news every day! :)

Living and traveling in Mexico said...

Muchisimas Gracias for telling it how it really is! I think more and more people should write up things like this, maybe the truth will get around!

Enjoyed your sense of humor,

I needed a good chuckle today and I got it!

I wish you could send this to everyone in Texas, I love Mexico City as you do!!

Haha, good one! I have beautiful memories from Mexico City, including hanging out at taquerias in the middle of the night. Yes, I'm still alive... ;)

I love the vignettes, but also let's remember that Washington DC's crime rate is 2.5 to 3 times higher than Mexico City's. If they only knew!

I would like to add to the headlines that a complete stranger, a receptionist in an office building, offered me a seat and a nice chat in HER office when she saw me standing in the corridor, waiting in front of my dermatologist's closed door. We picked up a nice conversation out of .... "courtesy" !

this is so good! you had your talents all hidden, you! more more more. big hug. hugo

I recently spent 5 days in Mexico City. I actually received several notes from friends before I left asking what I could possibly find there to fill 5 days. Some of them expressed their fear that such a "long" visit would invariably leave me open to an increased chance of becoming a victim of any number of dangers the city might inflict upon those who venture into its clutches. I am returning to Toronto for two months next week. Do I ever research or even consider what the crime rate there is or do I check if a violent crime has occurred recently before I get on the subway to go downtown? Did I do that before flying to Paris last May? Would I consider that before visiting Washington knowing that its crime rate is much higher than Mexico City's? Thanks Jim, for cleverly pointing out how naive and misinformed most North Americans are about the reality of living in Mexico. Between hippocritical government policy and the culture of fear that Americans seem to thrive upon, Mexico will continue to suffer from decreased tourism. In the meantime I will continue to enjoy the benefits as I did one beautiful morning when I had the entire museum at Teotihuacan to myself and then only had to share the amazing site with no more than 20 other visitors. How sad for those who rely on tourism for their living and how sad for those avoiding visiting one of the most fascinating and welcoming countries in the world.

Please send to The Los Angeles Times too.

Can't stop being amused by this one, Jim...

Very nice post! I must admit that I had this fear too and it doesn't help that my GF is from Piedras Negras and warns me to not go to el DF. I've never been but I've always had a yearning to go. I plan on visiting sometime next year and can not wait! Side note, I'm from San Antonio, TX and spent a lot of my youth in Nuevo Laredo. When I was younger I used to go to Monterey to visit/party and really loved it. As a kid I did visit Guadalajara and remember it's beauty and charm. Great post & Viva Mexico!

Well said, Jim. We join our voices to yours....Mexico City is a wonderful place o live. Friends from all 'round the world who visit for the first time are simply amazed by the ambience, nice friendly people and smooth living. Not to mention the food and the weather. Louis & Elodie

YeY Jimmy...great post....It made me smile as i reflected on my walks to yoga in the am...across the park. Pure Magic, everybody I past wishing me a buena dia.....with a smile.

Ya "not to mantion the food and the weather!

As i sit in my office in the Centro Historico, this red-bearded fair-skinned gringo laughed so much everyone the office asked me what was going on.

My own headline del dia:

Hi, Jim...so GREAT to 'hear' your voice through this reportage!!! I have had years and years (30+ to be exact!) of amazing memories visiting el D.F. I MISS MEXICO SO MUCH! So, along with all your other fans, I salute you, My Dear. Great fun here...more, please! Much love, Carolyn King (Viva San Miguelito!)

Great article Jim, with a good amount of humor. REally hit a note with me as ALL I hear is about the violence. Glad to know that an even peaceful life goes on in Mexico City in spite of all the reports. xxoo Dottie

I'll add my voice to yours as well...11 years in DF, having left Canada and it's wonderful here. Media be damned!

WTF Jim Johnson? Is anything on this blog true? You took a photo of me and my friend, and then you made up a bunch of LIES about what we said. Worried about ice in our juice? Ice isn't even an option! Why would we say that?!? Lame. I don't suppose any of the other "quotes" on here are accurate, either. Why waste your time writing a blog full of LIES? For that matter, why waste your time reading it? Hey everyone, if you are reading Jim's blog to get "the real story" on Mexico City... look elsewhere. I'll certainly be telling all my expat friends NOT to let Jim Johnson take their picture and LIE about them on his waste-of-space blog. TWO BIG THUMBS DOWN.

To my readers:
It seems that while most people saw the humor in this post, which was partly fictional, at least one did not. It was written in the spirit of levity and parody in order to point out and counter-balance the horrible news that is defining Mexico these days. The purpose of my blog is to inform people about the city I love. In this post I was trying to point out that many of us go about our ordinary, daily activities unscathed. I acknowledge that there is a horrifying 'war' going on in this country that has affected many people. In no way do I mean to deny or belittle that fact, or to o denigrate the suffering of others--nor to insult or mock the people I write about. I apologize to the reader who was offended, and have removed the photo in question.

Jim, one cannot help the humorless.

I just read the blog very funny...and so true! I remember when I first went into Cenrtral Partk, my heart was pounding my legs wobbly, I really wasn't sure I would come out alive and yet there were babies in buggies, people playing with boats on the lake and suddenly i felt such a fool!

Nice one, enjoyable indeed. It has me thinking about what type of headlines I'd write from my days in DF... "foreigner caught attempting to speak spanish, drink tequila and dance salsa with locals on the weekend. When asked about it, he said, "Yes, I am guilty as charged"

ha!!! hi jim, this is Liz from yoga and I just accidentally stumbled onto your blog. great stuff, this especially had me cracking up. you could add a headline: "gringos crash yoga class. mexicans apparently unfazed except when they don't understand the directions" (that would be me)