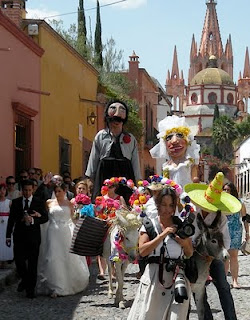 Lots of folks here in Mexico City take to the road on summer weekends, and one of the most popular destinations is the colonial town of San Miguel de Allende in the state of Guanajuato, about 4 hours north of the city.

I'll admit a certain bias since in I lived there for almost ten years and got to explore every nook and cranny of the place. But after travelling all over Mexico, I still think it's the most beautiful pueblo in the country. It's got one of the best preserved colonial centros, but it's not just the main plaza. Majestic 18th and 19th century architecture, cobbled streets, painted stucco walls and red-tiled roofs are found throughout the historic center, with few of the plastic, 7-11 type intrusions found in many other colonial towns. In 2008 it was named a UNESCO World Heritage Site and it attracts visitors from around the world.

Take a look at this beautiful, poetic video by Jack Alterman for an idea of how San Miguel looks. And it really does look like this (although the lack of traffic is a bit romanticized).

Once a sleepy little town that attracted artists and retirees looking for an inexpensive place to live, San Miguel has gone upscale in the last few years with lots of new, elegant restaurants, boutique hotels, and fancy stores. It's also drawing a lot more Mexican tourism these days, as any weekend visit to the Jardín, San Miguel's beautiful central plaza, will attest.

One of the great attractions of San Miguel is its rich cultural life. Religious festivals, processions and fiestas are almost a daily occurence here. I've never seen fireworks as amazing as those in San Miguel. The town is host to many world class events such as the annual Chamber Music Festival (soon--July 29 to August 14 this year), the Writers' Conference, and the Guanajuato Film Festival. (For updated listings consult This Week in San Miguel de Allende).

You'll find luxury hotels, like the swanky new Matilda or the cozy boutique Dos Casas, but also mid-range options like the folk art-filled Casa de la Cuesta. Budget travelers can head to the old stand-bys, Posada Las Monjas or the Quinta Loreto. If you're planning a longer stay there are lots of houses for rent in San Miguel (check out VRBO.com for listings). If the hedonistic aspects of 'downtown' San Miguel overwhelm you, check out this relaxing getaway http://www.sagradawellnessmexico.com/.

The increased shopping options are bringing in tourist dollars and pesos as well. The Fabrica La Aurora is a converted 19th century textile factory now filled with dozens of sleek design stores and art galleries. La Calaca and Zócalo are two shops specializing in collectible Mexican folk art. Insh'ala Imports sells unique home furnishings from all over the world, and you'll find great Mexico-inspired gift items at Abrazos design boutique. Don't miss the large and varied mercado de artesanias filled with local handicrafts (just behind the fruit and vegetable market) or the museum-like Galeria Atotonilco a few miles out of town (http://www.folkartsanmiguel.com/).

Some residents complain that the 'old San Miguel' is disappearing. Starbucks and McDonald's have appeared on the scene in recent years. Change is inevitable. But there's no doubt that San Miguel still retains a level of charm and beauty found in few places.

One veteran ex-pat lamented to me, "It all started to go downhill after that Life Magazine article came out."
"When was that?" I queried.
With a roll of the eyes and a resigned shrug she replied, "1958."

Check out the timelessness of San Miguel for yourself.

Disclosure: I am being compensated for my work in creating content for the Mexico Today program.
All stories, opinions, however, are completely my own.

San Miguel is still a pretty place, no doubt about it. However, it has sold its truly Mexican soul making making the bizarreness inherent to any Mexican city/town, palatable for the hordes of "ex-pats" -by the way, I love this term, "ex-pat", a white, anglo-saxon, privileged, old person, barely speaking the local language. A nice way to go around and make pretty clear that they are not "immigrants", they are "ex-pats". Sure, sure. San Miguel sometimes gives me the impression of entering in a generic, bland, suburban Mexican chain-restaurant. I do not discuss its beautiful appearance, but adding other aspects to the equation, San Miguel de Allende, is not, the most beautiful town in Mexico.

Have you been to San Miguel lately? The 'hordes' are now Mexican. The gringos are too afraid to come.

Also, Anonymous, ex-pat does not mean old or white--there are young people, Asian people, Black people in San Miguel right now who are also ex-pats. And it's really much less gringo-y now, as Jim says, which isn't so great for business but is very nice for the spirit of the town. Mexico is re-colonizing San Miguel, is the way I look at it.

welcome to the real world, mr. anonymous. what would you prefer? to have places like san miguel stay small and poor so you (who have obviously been lured to visit) can take adorable pictures of campsesinos begging in the street, albeniles tearing up the cobblestone streets with a pick ax and bare hands, burros weighted down with wood the men cut down precious trees to sell in the streets? i have lived in san miguel for sixteen years and, yes, it has been difficult to watch the changes. i can make a long list of the wonderful traditions i miss, that have past in this short time. however, the town has taken what is an inevitable turn (because of everyone of us – foreigners and nationals alike who have come here to visit and spend time and money – including you!) and is growing with as much grace as possible. while the horrible press in the united states has ruined their citizens from feeling safe to come here, they are being replaced by nationals from all over mexico, along with canadians and europeans. this natural progression is good and it’s all because of the “gringos” (ie: americans/ex-pats) who came here in the 40’s and those like us (including you!) helped grow san miguel stronger (and larger) with love, care, investment in the people (scores of non-profit organizations saving lives and educating the uneducated). the “bad” always shadows the good. who cares if it’s called “ex-pat” or “pro-pat”? that's meaningless. can any of us name one town that was small, precious and beautiful to visit that didn’t turn the tide towards growth and change? you are completely off base. how much time did you spend here? three or four days? do you speak Spanish?

"Anonymous" calls her/his self that for a good reason. She/he's an ignorant and cowardly person. I've been dealing with dangerous people like this all the years I've been in Mexico (30, more or less). "White, anglo-saxon"...etc. Ha! A 'Bronx cheer' to 'anonymous' from the OTHER 'expats': the black, gay, Jewish, young, non-american, less than privileged, ex-pats who became Mexican citizens and voted, those who fought to preserve San Miguel and celebrate its culture, those who protested the arrival of Starbucks and Mc-you-know-what-shit, those who learned to speak Spanish, those who went out to the campo and taught birth control and health-care, those who taught poor people to read, who married Mexican men and women and had children and raised them in San Miguel, who invented businesses and employed people, who, back in the '40's put a poor, forgotten. provincial town on the map as a cultural and academic destination...did I leave anyone out?

San Miguel is one of the few places in Mexico where one can see some of the best folk art being made in Mexico today. Along with the galleries mentioned don't forget to see Mariposa, Tesoros, Galeria Atotonilco the hidden treasures in the nooks and crannies of the Artisans Market behind the Ignacio Ramirez market and the wonderful new Toy Museum (Museo de Jugettes). All these people are doing their small part to keep this cultural patrimony, the most Mexican of Mexican arts alive.

As someone who lives in the nearby city of Guanajuato, I want to mention the latest example of the flourishing creative spirit in San Miguel. Today, the closing day of the GIFF (Guanajuato International Film Festival) I saw a visually exciting short made in SMA showing the numbers 1 through 99 that San Miguel people pass every day, addresses, gas prices, you name it. Simple, memorable and muy mexicano.

San Miguel de Allende is a truly magnificent location, and is becoming a locale of choice for American and Canadian expats. There is a highly developed infrastructure that supports a very large and sophisticated English speaking community here. Culture abounds, and there is extremely active social calendar. There are easily forty or more art galleries in town. The climate is among the best, with warm, dry temperatures year round. Real estate here is among the most beautiful in the world, and your dollar can buy you so much more house than in North America. I lead exciting home buyer trips to San Miguel. Join me on one of these exciting tours to view and buy real estate in San Miguel.
http://www.livinginsanmiguel.com

Jim Johnston is one of the most astute writers on all things Mexican. I was pleased to see this post on San Miguel. We chose San Miguel de Allende six years ago for its combination of climate, culture and the basic warmth of its people. I became interested in the process of becoming an expat and wrote a book based on conversations with 32 Americans and Canadians who had also made the move. It's mainly a way of getting inside their heads. It's called San Miguel de Allende: A Place in the Heart. Here's a link to an excerpt on my website:
www.sanmiguelallendebooks.com/aplaceintheheart.html